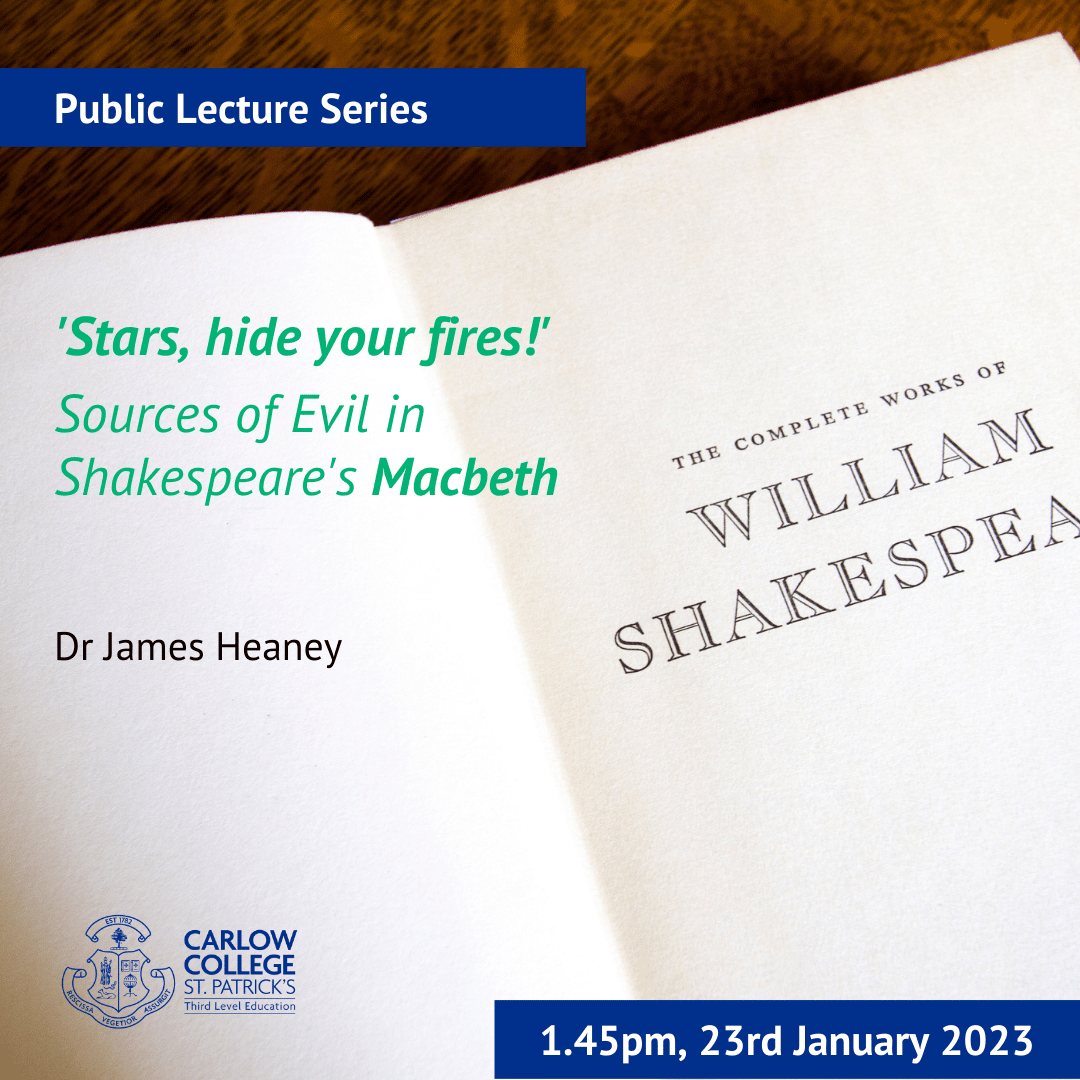 Carlow College, St. Patrick’s invites you to our public lecture focusing on Leaving Cert literature where Dr James Heaney will examine how the ‘idea of evil’ helps to forward the internal and external conflicts in Macbeth.

Irrespective of whether it takes a human or supernatural form, or whether it manifests itself in words or deeds, the presence of evil in Shakespeare’s The Tragedy of Macbeth (c. 1606) is one of the most powerful – and chilling – features of this most violent drama.

In this lecture we will examine how the ‘idea of evil’ helps to forward the internal and external conflicts that the play dramatises, what it reveals to us about Shakespeare’s conception of ‘the human condition’, and extent to which the theme of evil in this work can be interpreted in terms of the social and political conditions that prevailed during the reign of King James I of England and Scotland.

James Heaney completed his second-level education in 1983. Over the next two decades he worked in a range of different jobs and countries (as a barman, roofer, English-language teacher, and entrepreneur) as well as experiencing periods of unemployment. He returned to full-time education as a mature student in the 1990s, and graduated from Maynooth University with a BA (Hons) in English and Philosophy in 1996. In this year he was also awarded the prestigious Pierce Malone Scholarship in Mental and Moral Science by the National University of Ireland. James went on to complete an MA in Irish Writing at Maynooth, before undertaking his PhD at Trinity College, Dublin. Supported by a Government of Ireland Scholarship grant, this project involved a comparative analysis of revolutionary literature in Ireland and Spain in the period 1913-39.

James’ research interests include the literature of the Irish Revival, modern Irish women’s writings, and comparative literary studies with particular reference to Ireland and Spain. He has published essays on a wide range of Irish and Spanish writers including Mary Lavin, Kate O’Brien, Æ (George Russell), W.B. Yeats, Patrick Pearse, Antonio Machado, Manuel Azaña, and Rafael Alberti. He is currently completing a book on the subject of republicanism in the literature of the Irish and Spanish revolutions of the early-to-mid twentieth-century.

This event will be available for attending both in-person or livestreamed – please select the correct ticket up when booking your place.

Two ticket options will be available: