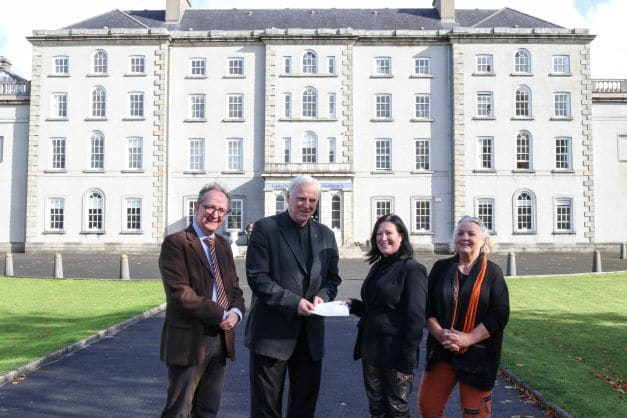 This new collaboration will see a series of events happen over the next two years that will provide an opportunity for Carlow College students and Co-Op members to learn together, to grow as writers, and to mature in their practice, to the mutual benefit of both.

The Carlow Writers’ Co-Operative has been running in Carlow for nearly fifteen years, a self-directing Creative Writing group that sees members mentor each other, to enhance their writing, to generate new writing, and to facilitate the public reading of work created by group members.

Carlow College President, Fr Conn Ó Maoldhomhnaigh said: “Carlow College, St Patrick’s are delighted to have this opportunity to collaborate with the Carlow Writers’ Co-Operative on supporting the development of Creative Writing in Carlow.”

Lecturer in English and Poet, Dr Derek Coyle said: “Carlow College is keen to support original writing in Carlow and the region, to help writers to develop their creative writing skills and practice. Working together, we will facilitate workshops and readings, with the aim of bringing leading Irish and international practitioners to Carlow, to help enhance a Creative Writing culture that is already here in the College as well as the town.”

Carlow College has a strong tradition of promoting creative writing through hosting of the Carlow Writers-in-Residence programme and it’s annual Literary Awards and Creative Writing Showcase, which has been celebrating the creative writing achievements of its’ students for the last 10 years.

Speaking of the collaboration, Lisa McAree, Treasurer of the Carlow Writers’ Co-Operative said: “We are delighted to make this contribution to a joint fund so that we can collaborate with Carlow College, St Patrick’s in the development of poetry and literature in and for the wider community in Carlow and beyond. We both seek to encourage new poets, new writers in the region.”

“Current and former members of the Carlow Writers’ Co-Operative have been benefactors of the great work and support that Carlow College, St Patrick’s has consistently demonstrated throughout the years in the area of Creative Writing. We hope the partnership will grow in years to come, and that Carlow will witness a lively output of new poetry and writing, and that many people in the community will participate in, and benefit from, the arts.”