I first became interested in the relationships between medieval people and the inanimate objects they owned as a postgraduate student when I came across a collection of Dublin will inventories dating to the fifteenth century. These inventories were drawn up to accompany a person’s last will and testament and they listed everything from four-poster beds to salt cellars. At that time, I was particularly interested in the objects people bequeathed pro anima – for the benefit of their souls. Sometimes the objects were intended to be sold, with the proceeds going to pay for the funeral or to purchase masses to speed the soul’s journey to heaven. Often, however, objects were left for the use of parish churches or particular churchmen. Silver cups were left to be used as chalices, fine linens to be converted into vestments and jewellery to be displayed on religious statues. These bequests were especially common in women’s wills and I was struck by both their practical nature and the ease with which domestic artefacts could be transformed into religious objects. In this way a treasured and perhaps valuable item could produce ‘spiritual capital’ and go on benefitting the donor after their death.

These Dublin inventories related to men and women from a wide range of social and economic backgrounds. The inventories of the well-off were often long, containing dozens of different items, some utilitarian and some purely decorative. On the other hand, there were some very brief inventories, giving a glimpse of spartan domestic interiors where the everyday objects were probably so shabby and repaired that they were not worth listing. Occasionally it was evident that a poor person had one or two special objects and they gave a good deal of consideration to their disposition. So a women left her wedding ring to one daughter and a set of rosary beads to another. Another woman owned a three-legged pan and she left this to the communal use of her neighbours in order that they might think of her and her ancestors and say prayers for their souls. The memory of this woman, who undoubtedly would not have been able to afford a funerary monument, lived on in the utilitarian object she bequeathed to her neighbours, and she was blessed each time a meal was cooked in her pan. 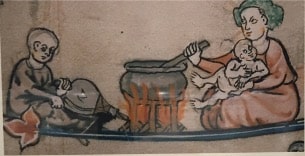 I recently returned to the Dublin inventories as I was writing a paper exploring the possessions of the elite in medieval Ireland. The paper tries to identify the objects that were collected, prized and displayed by individuals and groups and to interrogate the degree to which certain objects solidified or transcended social and ethnic identities. For the purposes of the paper the ‘elite’ comprised not just the nobility of both Gaelic and Anglo-Irish populations, but also members of the prosperous urban oligarchies and high-status administrators and churchmen. In the course of researching and writing this paper, I identified a number of different ways in which people interacted with and valorised objects and I want to share a couple of those observations here.

On first consideration there appeared to be an enormous gulf between the material possessions of members of the Gaelic and Anglo-Irish elites. Silver utensils, fine clothing, silks, furs, tapestries and jewels were common in the possessions of wealthy Anglo-Irish men and women. The value of these goods was considerable, but it was not just economic. The objects also functioned as signifiers of prosperity, class and even power. Their value was partly at least in the message they conveyed, in what Bourdieu has called their ‘cultural capital’. Members of the Gaelic nobility, even eminent figures like the Great O’Neill, by contrast, were described as living austerely with very few possessions.  In 1397-8, the Catalan knight Ramon de Perellós paid a visit to the winter court of O’Neill. He described the king, the greatest chief in Ireland, presiding over a Christmas Day feast clad in a simple tunic with no breeches, hose or even shoes. De Perellós relates that a great feast was laid out on rushes on the ground and the king wiped his mouth with grass. Historians of Gaelic Ireland have noted that the medieval Irish nobility, especially through the medium of Bardic poetry, deliberately portrayed themselves as spartan warriors in the mould of Finn Mac Cumhaill and his Fianna. Therefore, not having luxurious possessions was as potent a message as that conveyed by the extravagant lifestyles of some of the Anglo-Irish.

The Gaelic Irish did place value on some objects, however, particularly those with familial or ecclesiastical associations and this leads me to my final observation. People were interested in objects that had ‘stories’, that were old and had acquired accretions of meanings over time or were unusual and rare. When we visit someone’s home today we may be drawn to comment on some of their possessions, particularly those that may have embedded narratives. Great Grandma’s tea service may be produced for a special meal, or an artefact purchased during a foreign trip be given prominence on the mantle piece. Medieval people felt the same way and some of the objects described in documents or that have survived as historic artefacts have literally a biography or ‘a life of their own’.

Cups or drinking vessels were especially likely to be prized possessions that were passed through generations of the same family and were used on special occasions that celebrated the life course, such as births, betrothals, marriages, and funerals. The Dunvegan cup (see below) is an example of a ‘mether’ – an Irish drinking vessel that was passed around during feasts. A simple mether was made of wood but more ornate versions existed in which the wood was covered with fine metalwork and jewels. The Dunvegan cup may have been in use for several centuries and went through a number of refurbishments. An inscription on the cup tells us that the last refurbishment was carried out by Catríona, wife of Seán Mág Uidhir (Maguire), lord of Fermanangh in 1493. The cup may have been part of Catríona’s dowry.

In fourteenth and fifteenth-century Dublin, a few individuals possessed ‘coconut cups’, drinking vessels made from the polished shell of a coconut embellished with silver gilding and mounts. Coconuts were exotic items which might occasionally be included in the cargoes of Venetian vessels which plied between east and west. Dame Margaret Nugent, widow of a Dublin mayor, owned a coconut cup of which she was very proud and which was valued at a substantial 40s. William Bromley, who was Treasurer of Ireland also owned a coconut cup whose previous owner had been a Deputy Justiciar of Ireland. These cups were clearly items of conversation, passed between individuals and conveying status because of their narratives and their rarity.

The relationships between people and the objects they owned were complex and these relationships could animate objects making them into instruments of social cohesion and symbols of power and prestige. Late-medieval Ireland was culturally diverse, but cultural differences were occasionally transcended and there were common themes in the way people interacted with the objects they acquired and valued.