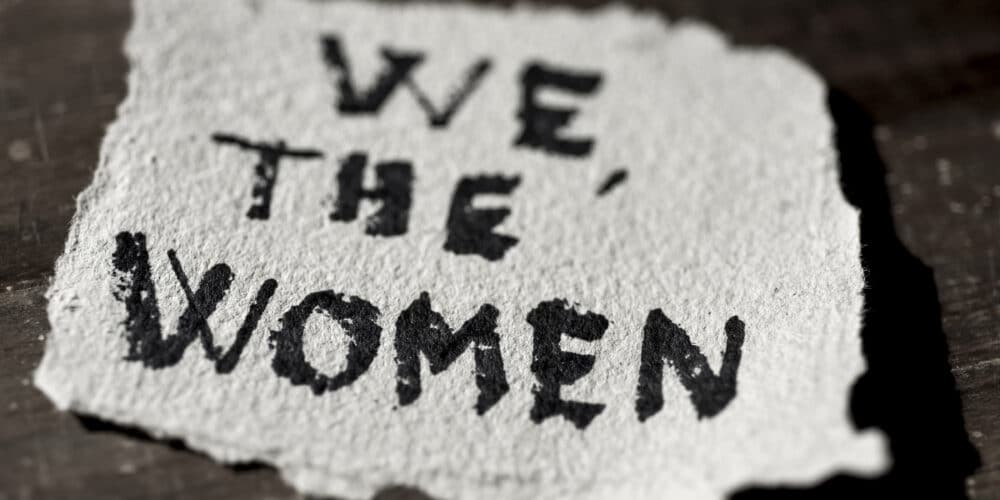 I fell in love with feminist theory during my time in Carlow College, St. Patrick’s when I took an elective called ‘Feminist Political Theory’ with Dr Sarah Otten in my third year. The works of classic proto-feminist thinkers, from Mary Wollstonecraft to John Stuart Mill, and from timeless feminist writers such as Kate Millett and Bell Hooks, completely transformed my perception of the cultural and political customs and institutions we inherit – and most of the time accept without question – when we are growing up. As a result, I decided to further my knowledge in this area and so I applied for a Master’s Degree in Gender and Women’s Studies in Trinity College, Dublin.

Feminist theory is a vast pasture with many varied specialties and fields as there are different kinds of grass (if you’ll stick with me and my meadow metaphor). There is no one feminism, but an assortment of feminisms. These include Marxist and socialist feminism, radical feminism, eco-feminism, anarchist feminism, xeno-feminism, care ethics, and many more. Personally, I define a feminist political project as one that aspires to eliminate hierarchical arrangements that contribute to the abuse and exploitation of members of groups based on their gender identity, race, class, ethnicity. Many factors participate in this exploitation including sexism, racism, colonialism, and capitalism, which are inextricable from each other.

My particular area of interest in feminist theory is socialist feminism, although I’m somewhat of an in-betweener who enjoys variety. For example, I have researched and written about the rights of the trans community, assessed the links between hegemonic ‘toxic’ masculinity and violent radical extremism, and have investigated pornography as a method of symbolic violence against women while engaging with the works of philosophers such as Simone Weil, Michel Foucault, and Pierre Bourdieu.

In recent years, feminist discourse has become more visible and celebrated in mainstream culture. This is a positive development for feminist thinkers and activists of course; with greater visibility comes more potential for feminist objectives to come to fruition (such as the 2018 vote to repeal the Eight Amendment, for example). However, along with many other feminist scholars, I argue that popular feminism in the 21st century has reached an impasse.

Visibility has become an end in itself. Corporate-, or market-, feminism has assumed the most noticeable form of the movement, and primarily serves a small number of financially and socially affluent white women, with small scatterings of token diversity and inclusion. This brand of feminism has become the handmaiden of capitalism, proving a profitable marketing scheme and sustaining the capitalist system that is part of the disenfranchisement of many. Gender equality as it is currently promoted is based on patriarchal models, which values hierarchies and competitive individualism.

As a result of these observations, I have chosen to devote my Masters’ dissertation to a multidisciplinary examination of neoliberalism in an Irish context, considering how this economic and ideological policy has crossed boundaries in to the social and cultural, and colonized the language of feminist movement. After making the case that Irish politics and economics is certainly shaped by neoliberal strategies that include austerity as a key procedure, I plan to examine how feminism in Ireland has been co-opted by neoliberal discourse and how this has been expressed in the ongoing ‘care crisis’ in Ireland.

Popular feminist discourse in Ireland is captivated by what bell hooks called ‘careerism, getting women employed in high-paying professions’.[i] Irish sociologist Kathleen Lynch often comments on the ‘care-less model of the citizen’ that is so intensely endorsed in neoliberal capitalist societies.[ii] Aspirations of female entrepreneurs preoccupy mainstream media. However, the reality is different as numbers show that women’s labour is predominantly engaged in the domain of social reproduction such as childcare, healthcare, and care for the elderly.

The expansive distribution of feminist ideas is not necessarily a negative thing, but one must question why this type of feminism has become so popular. ‘Womenomics’ and ‘femvertising’ promulgate the notion that social justice is achieved by the “empowerment” of individual women, disregarding the collective accomplishments from past feminist efforts. Because caring work is so gendered it is staggering that it has not garnered more attention from popular feminism. It is well documented that austerity has harsher consequences for women than men, therefore I make the argument that confronting austerity and its offshoots is an urgent priority for Irish feminism.

Imposed on Ireland in the aftermath of the global financial crisis of 2008, austerity has exhausted the Irish state’s care systems and the social safety net through cuts to the Departments of Social Protection and Children and Youth Affairs. This has reduced funding for groups that assist in drug rehabilitation, violence against women, projects for youth, arts councils, and many more. It is well documented that austerity takes the highest toll on those least able to bear it.

One cannot discuss the above without considering the significant impact that COVID-19 has had on highlighting and exacerbating the aforementioned ‘care-less state of Ireland.’ The outbreaks of the virus in nursing homes, meat processing factories, and direct provision centers are just the tip of the iceberg in illustrating how fragile the social safety net is and how vulnerable our fellow citizens are. This is an enormous issue for feminism, not just because women suffer more from austerity measures, but because the injury that comes from neglect on one segment of our society has affects for us all.

What if we re-conceptualized a political and social organisation based on a model that supports and nurtures based on needs and equity for humanity, non-human animals, and the environment? The serious pursuit of this model must be the dominant form of feminism, especially coming from a younger generation of feminists, many of us who were too young to understand the significance of the “bail-out” agreement between the Irish government and the International Monetary Fund in 2010, and the detrimental effect this would have on our futures. There is a lot on the to-do list for Irish feminism and my research is just a drop in the water. It is one thing to highlight a problem, but we must be open to exploring resolutions and putting them into practice. As Marx wrote, ‘philosophers have only interpreted the world, in various ways. The point, however, is to change it.’

Nicole Burke graduated from Carlow College’s Arts and Humanities programme in 2019 and she is now currently finishing up an M.Phil in Gender and Women’s Studies at Trinity College, Dublin. Her main research interests include critiques of neoliberal feminism and the Irish care crisis, topics which are the focus of my master’s thesis. In her spare time, she writes for The Book Slut. Her work can be found here: https://www.thebookslut.com/profile/nburke2536/profile